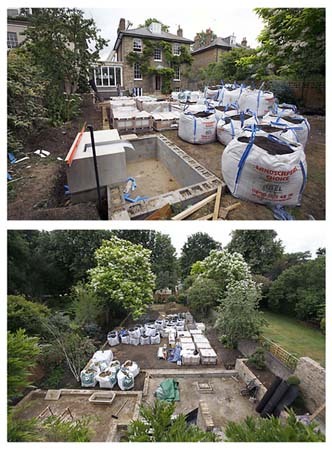 Garden designers are problem solvers. Every redesign has its own set of challenges - and that is often the reason we are called in.

The first stage of the design process is an initial consultation to discuss the garden. This is followed by a full site survey, which is used as a basis for the layout plans.

These will show the proposed design for the garden, detailing all major elements, such as terraces, steps, planting beds, pathways etc. Great care goes into ensuring that the materials being used are sympathetic to the project.

For the Canterbury courtyard, the brief required that the garden should feel as if it had been there for years. I used locally sourced reclaimed flagstones for the paving in combination with ‘Crowborough’ stock bricks, which have soft red tones that fit in with the surrounding historic buildings.

For the Georgian home, I wanted to translate to the garden the cool clean lines being created for the property by the architect Charles Barclay.

We chose French limestone for the terraces to give crispness and definition. Further into the garden the stone was repeated with a smaller terrace and a water feature – a 1.3tonne solid block. The limestone used is one that has gone through rigorous scientific tests to ensure it will not be damaged in harsh winters.

One of the challenges during this build was a lack of access. Materials often needed to be carried up through the basement. A crane was used to lift the limestone block over the house, and to place it on its reinforced concrete base.

During a build, I like to work closely with the chosen contractor and oversee the project.

A medium-sized town garden will normally take in the region of six weeks to construct. But when a home is being refurbished, it makes sense for the work in the garden to be carried out in stages to fit as conveniently as possible into the overall schedule. This means large trees can be brought in early, and the messiest parts of the project are completed while the house is still in the construction phase.

On completion of the hard landscaping, the softer elements are brought in - new lawns are laid, beds are prepared and planted. We install automatic irrigation systems to ensure that the new plants receive adequate water as they settle in and set maintenance programmes in place if required.

The aim is to create gardens that will give their owners many years of pleasure.